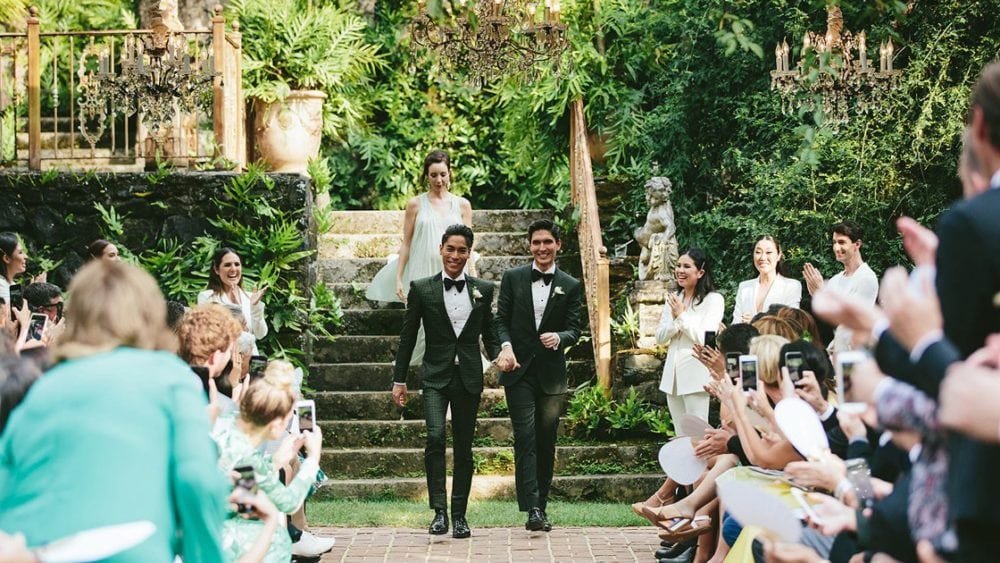 “We like to joke that Mark Zuckerberg introduced us eight years ago, as we first met through a casual conversation via Facebook,” Ross Matsubara, the vice president and style director of Nike Communications—a PR agency that counts Moët & Chandon as one of its clients—says when chatting about how he and Noa Santos, the founder and CEO of Homepolish, first became acquainted. “Noa and I were both born and raised on the same island of Oahu, Hawaii, but we didn’t get to know each other until October 2010 in Manhattan. It was Halloween night on another island 5,000 miles away from home.”

While the two share nearly identical paths in life, they’re completely different in almost every other way. They were raised on opposite sides of the island and attended rival high schools. Ross played sports and was known for hosting weekend parties, while Noa was a bookworm and senior class president. They attended colleges in California, and then, after graduation, they both eventually moved to the Big Apple.

And so, true to character, on that fateful Halloween night back in 2010, Noa was home in his pajamas enjoying a quiet night in, while Ross was out party-hopping. “Noa maintains that he stumbled across a photo of me completely serendipitously, as we had zero mutual friends, but I still think that this sounds a little suspect,” Ross teases. “His first message was: ‘Hey, I just moved to New York and saw that you’re also from Hawaii . . . would you want to grab coffee sometime?’ My response was: ‘I don’t do coffee; I do drinks.’”

The two chatted for hours on Facebook that night, exchanging stories of Hawaii, California, and their moves to New York. “Our high schools’ historic rivalry offered an easy and continual go-to for cracking jabs,” says Noa. “But when I jokingly said that our relationship would never work because of our schools and Ross replied with, ‘A rose by any other name . . . ’ I knew I had to meet him!”

Their first date was two nights later at the Rusty Knot. “I had plans to meet my girlfriends for drinks and invited Noa to join, not thinking that he actually would,” Ross admits. “I almost forgot he was scheduled to come when I caught a glimpse of him walking up to the entrance through the booth window. He was wearing a crisp white oxford shirt, navy slacks, and looked immaculate. Like Clark Kent, but younger and more stunning.”

Eventually each of Ross’s girlfriends took off, and Noa and Ross were left to close down the bar. “It was a Tuesday, so beers were $2, and I think the end bill was over $100!” Noa recalls, laughing. “I eventually dropped Ross off before continuing home. I remember we both rushed back to our apartments to gush to our respective roommates about the night, and we were dating by that weekend.”

Six years later, Ross accompanied Noa on a work trip to Paris. “On the first night, we were strolling along the Champs-Elysées when Noa paused in front of the Dior flagship, grabbed my hands, and pulled out a small red leather box as he dropped to one knee. My confusion immediately turned to heart palpitations when Noa started to deliver a sweet speech,” Ross remembers. He then opened a box to reveal a gold Cartier Love ring and asked Ross to marry him. “I remember shaking, but immediately saying, ‘Yes!’ Then Noa pulled out a Tiffany & Co. blue box with two Paloma Picasso gold rings, and he stacked them on either side of the Cartier ring on my finger. So there are three stacked rings with eight grooves, eight diamonds, eight grooves—which stands for eternity in Asian culture.”

Noa then guided Ross across the street to L’Avenue restaurant, saying, “This was never a work trip. We have six days in Paris to celebrate us.” At that moment, four of their best friends—from all different chapters of their lives—emerged screaming congratulations with cocktails in hand. “I wanted to re-create the final scene in the Sex and the City movie when Big surprises Carrie with all of the girls after they elope at the courthouse,” says Noa.

After the news had sunken in, the couple started planning, setting a wedding date for exactly two years after their engagement week. “We always knew we had to get married in Hawaii,” says Ross. “It’s our shared home, and we have so many loved ones on the island. We spent months searching for a venue and planner that reflected our sensibilities, but nothing was resonating. Noa and I share a deep love for where we came from, but are just not the barefoot, beachside, outdoor, and resort wedding type.”

After nearly losing hope, they stumbled across an Instagram photo of Haiku Mill and were immediately spellbound. A former sugarcane factory in the 19th century, the historic mill on the north side of Maui is now a breathtaking ruin on a privately owned estate.

They enlisted Kimiko Hosaki to oversee everything. “She was our event designer, planner, magician, relationship adviser, lifesaver, and, now, is one of our dearest friends!” says Ross.

The entire creative direction was inspired by Alfonso Cuarón’s vivid 1998 film adaptation of Great Expectations. The film centers around Ethan Hawke’s character—an artist and painter from a small town who moves to New York City. “But let’s be honest, we relate more to Anne Bancroft’s brilliantly eccentric portrayal of Mrs. Dinsmoor,” Ross laughs. “Her decaying manor is submerged in a spectrum of green decor and lush vines. Every outfit, slack of wallpaper, vintage radio, ashtray, lamp shade, martini glass, and eyeliner is a different wash of green—it’s intoxicating!”

To heighten the theme, the grooms encouraged all of the guests to arrive in black-tie green ensembles by enclosing a wedding Pantone card within the invitation suite. “We love a good color story, and the Pantone card was a cheeky nod to Noa’s interior design background,” Ross explains. “It was a tall order, but our guests ended up loving the challenge and everyone looked sublime!”

Along with floral designer Mandy Grace, Hosaki created a majestic world of greenery that showcased the Mill, but also made it look as though the entire space had been decorated perfectly 20 years ago and then left alone to run wild. Each of the three long guest tables was adorned with long runners made from local greenery and hundreds of long-stem tapered candles. It was important to Noa and Ross that the tablescapes and decor be chic but masculine, brimming but not overwhelming. “Our rule for Kimiko and every element of the wedding was: No bridal!” Ross says, laughing.

Their unwavering attention to aesthetics extended to their wardrobe. Noa and Ross worked closely with CFDA menswear designer David Hart to design their custom dark green tuxedos. Ross’s was a bold paisley print, while Noa’s was a darker green with a sheen.

Their six bridesmaids—plus Vogue Style Editor Edward Barsamian—were in ivory power suits by Theory. The suits had deep-V-cut lapels and were worn sans bra. “The vision was a warrior army!” Ross says. Loeffler Randall silver shoes completed the look. Meanwhile, for beauty, Ross ran around the city prior to departure, searching for the exact shade of black-green nail polish he envisioned, ultimately landing on NARS Zulu, which is actually discontinued. “It was important that our girls not look ‘bridal’ with blush or glossy nude nails,” he explains. “It would have changed the entire vibe of the ivory suits.“

For the ceremony, guests were transported from the Andaz hotel to the venue in luxury shuttles. Upon arrival, they were greeted by servers with trays of Moët & Chandon Rosé Impérial Champagne, St-Germain spritzes, and fresh mango iced tea made from the giant 100-year-old mango tree located onsite at the mill.

The bridesmaids and officiant entered to an enchanted rendition of the XX’s iconic “Intro.” “Everyone assumed the bridesmaids were going to come in from the rear, as most precessions do, but our officiant entered first from the front staircase just before our six bridesmaids emerged from three different corners—two pairs from opposite staircase balconies in the front and two from the rear—before converging and sashaying down the runway,” Ross explains. “It was dramatic and surprising, and the reaction, we were told from guests following the ceremony, was: ‘Shook!’”

After Noa and Ross walked down the aisle flanked by their parents, April Hail, Ross’s senior prom date, officiated while six months pregnant in a custom pale mint green chiffon Grecian gown designed by Kini Zamora. She delivered the ceremony before the couple exchanged vows they wrote themselves. “Noa couldn’t actually get through his vows as he was weeping from the start,” Ross remembers.

Once the ceremony concluded, the evening transitioned straight into a festive cocktail hour. “Considering my work, cocktails were extremely important to us,” Ross notes. “So Kimiko was very thoughtful in pairing us with Steph Smith, who founded Garnish, an incredible craft cocktail and mixology company on Maui that honestly rivals some of the best bars in NYC.” Drinks were served beneath the century-old mango tree, dripping with Hawaiian florals that Grace created to evoke a living “photo moment.”

The couple collaborated with chef Brian Etheredge, founder of Cutting Edge Catering, on a menu of elevated local favorites that culminated with a wedding cake alternative for dessert: a coconut milk panna cotta as well as lightly spiced malasadas (a Hawaiian-Portuguese donut), paired with Kona coffee espresso shots to keep guests fueled.

“My eldest brother, Wyeth, kicked off the reception with a traditional Banzai toast!” Ross remembers. “It’s a staple at Japanese weddings in Hawaii. Banzai refers to the 10,000 years of life and the happiness expressed from guests to the married couple, and is similar to ‘cheers’ where everyone takes a celebratory sip. Upon asking everyone to stand, Wyeth shouted the words ‘Shinro shimpu, Banzai!’ after which our guests repeated ‘Banzai!’ in thunderous unison. Wyeth repeated two more times, with guests repeating in increasing intensity. It was loud, guttural, and shocked our NYC guests until they realized it was a cultural tradition!”

Post-dinner, DJ Chris Gniffke got the dance party started, and the festivities closed out with traditional Polynesian fire dancers, who performed with live drummers as a surprise. Late night, guests were transported from the mill to the couple’s villa at the Andaz with sippy cups filled with lilikoi vodkas. There, awaiting everyone, was what the newlyweds dubbed a “Gold Club Party.” The entire villa was covered in gold tinsel with gold balloons, lights, silverware, plates, candles, et cetera. There were bartenders and local Hawaiian bentos with pulled pork, fried rice, chicken wings, and other after-hours food. Ross immediately changed into a vintage silk green printed pajama set with velvet bedroom slippers so he could comfortably dance the night away, while Noa maintained his black-tie ensemble—including his floral boutonniere—throughout the entire evening. “This was so typical of our different personalities,” Ross says, laughing. And you know what they say: Opposites attract.